13 Amazing Places to visit in Albania

For visitors looking for something off the beaten track, Albania, a small and yet unexplored corner of the Mediterranean, is the perfect place for nature lovers and beachgoers alike. If you are gearing up for a visit, here are thirteen spots that are not to be missed. 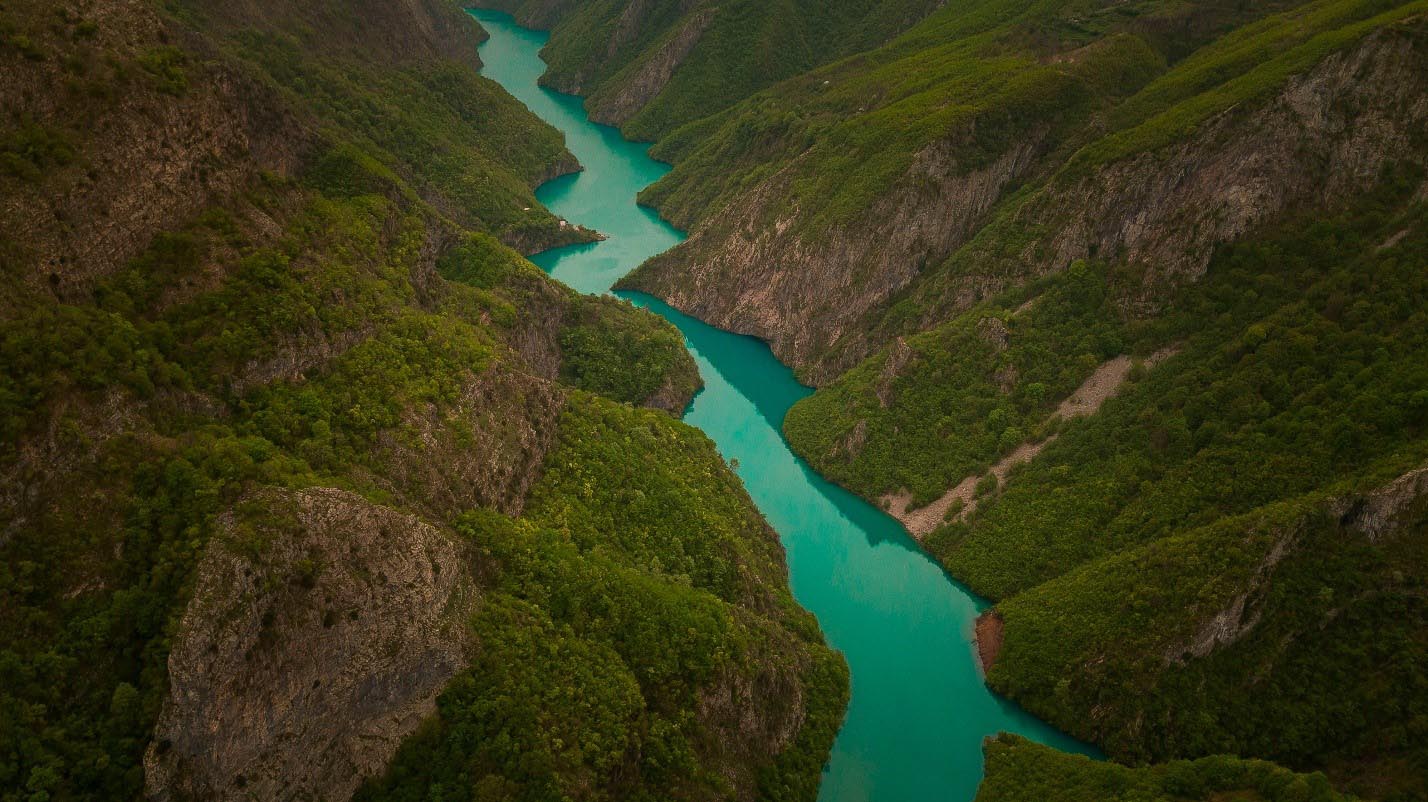 Often called the Thailand of Albania, Shala River is a hidden gem that is home to some of the most stunning landscapes in the country. Concealed inside the Albanian Alps in the north, this destination is accessible only by boat. To reach it, follow the road to Vau i Dejës, and then take the boat to Lake Koman. Shala River is the perfect summer destination, a respite from the heat and an opportunity to be one with nature. 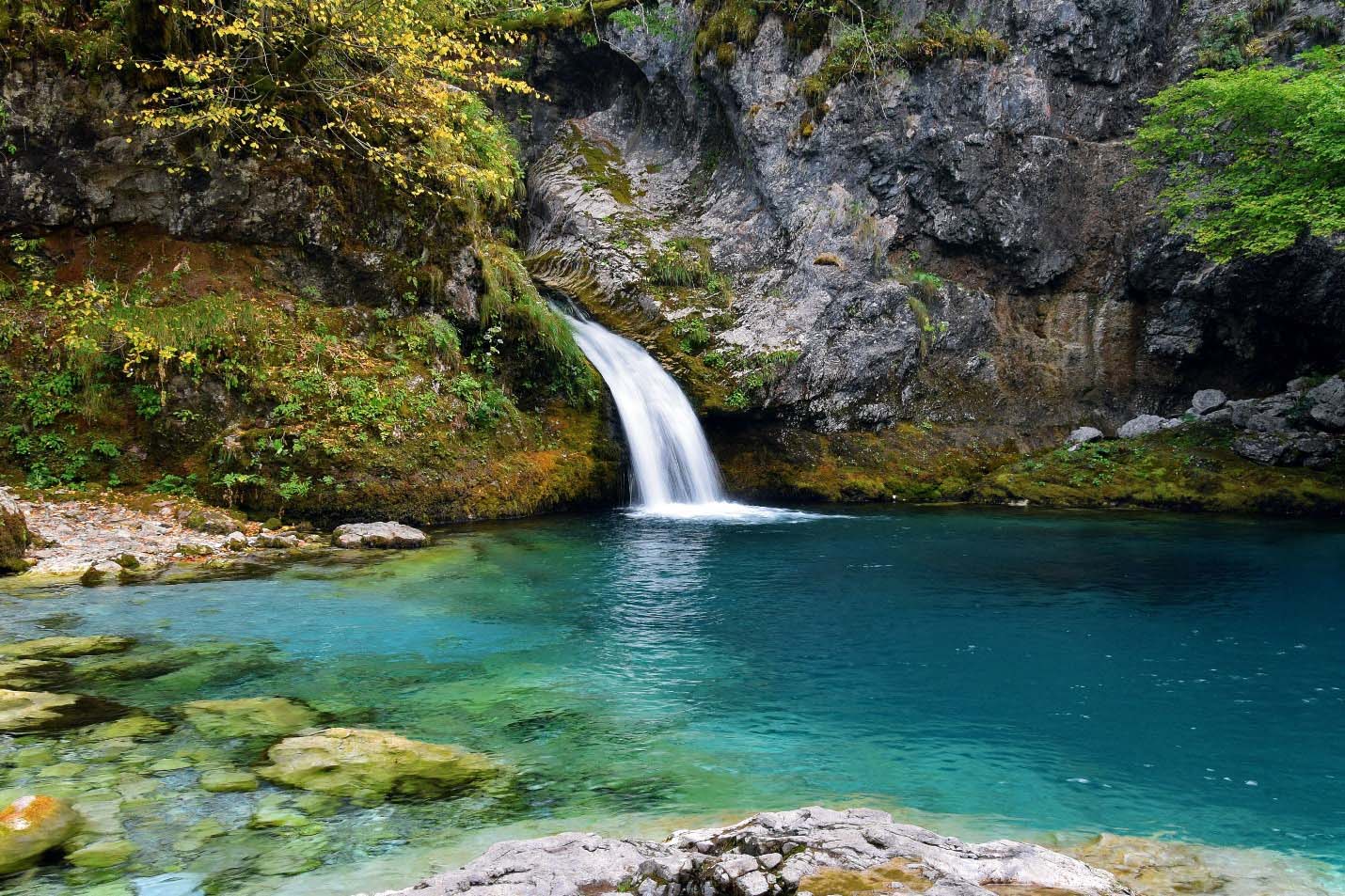 The Blue Eye of Theth is often shadowed by its better-known southern counterpart, but it is a magnificent blue-green pool hidden in the northern Albanian Alps, close to the village of Kaprre. To reach the Blue Eye of Theth, visitors must pass through the Grunas waterfall, another majestic beauty. Even in the middle of summer, the air is crisp and offers an unforgettable panorama. Nearby, visitors can take advantage of a small clearing in the woods for a picnic, or just to relax. 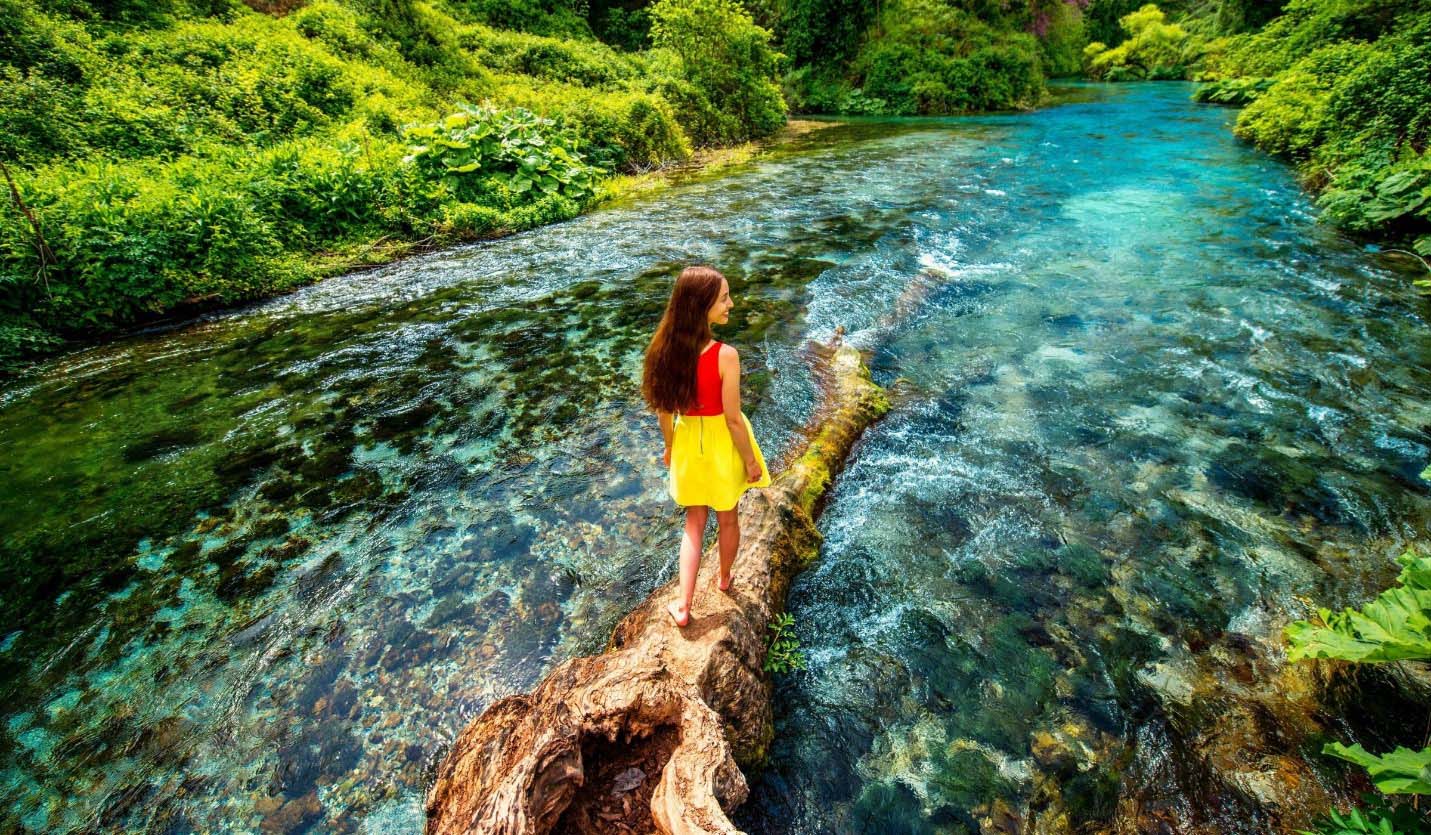 Perhaps one of the most well-known destinations in Albania, many tourists from around the globe flock to the Blue Eye of Saranda, a spring with chilly waters and an arresting blue color that bubbles forth from a deep pool. While divers have explored fifty meters of its depths, its actual size is unclear. The water itself is a constant 10 degrees Celsius, requiring some fortitude to wade forth in its midst. But the experience is worth it. The Blue Eye spring is the initial water source of Bistricë river whose mouth is in the Ionian Sea, south of Saranda, Albania. 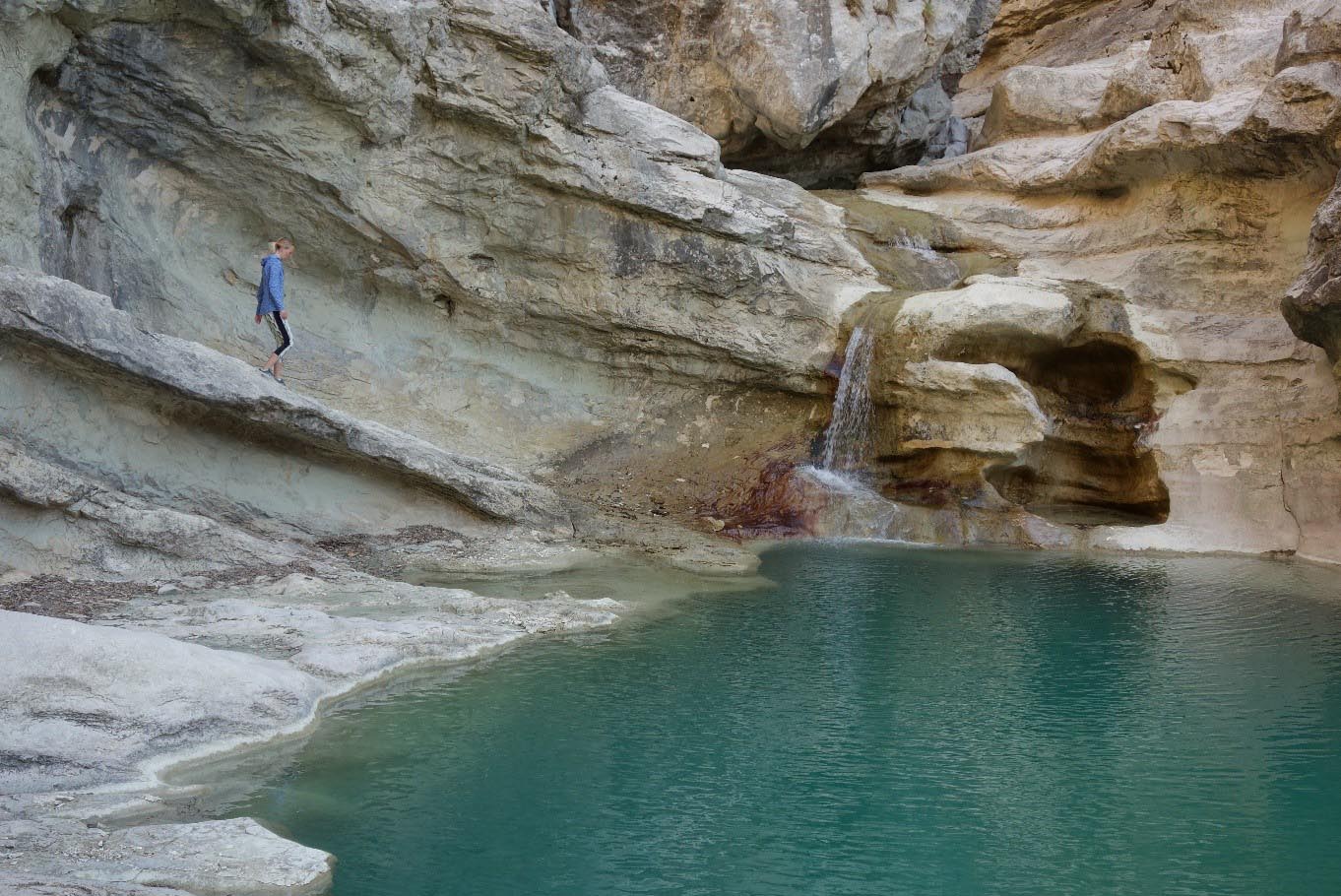 The lake and the surrounding area known as the Eye of the Cyclops (Syri i Cikllopit) is a popular weekend getaway among residents of Tirana and the area. While well-frequented, it is still considered a hidden gem with a mythical past, and attracts those looking to explore nature, or spend a few hours in absolute peace. The area features unique small cataracts surrounded by rock formations, creating a singular and unrepeatable panorama. 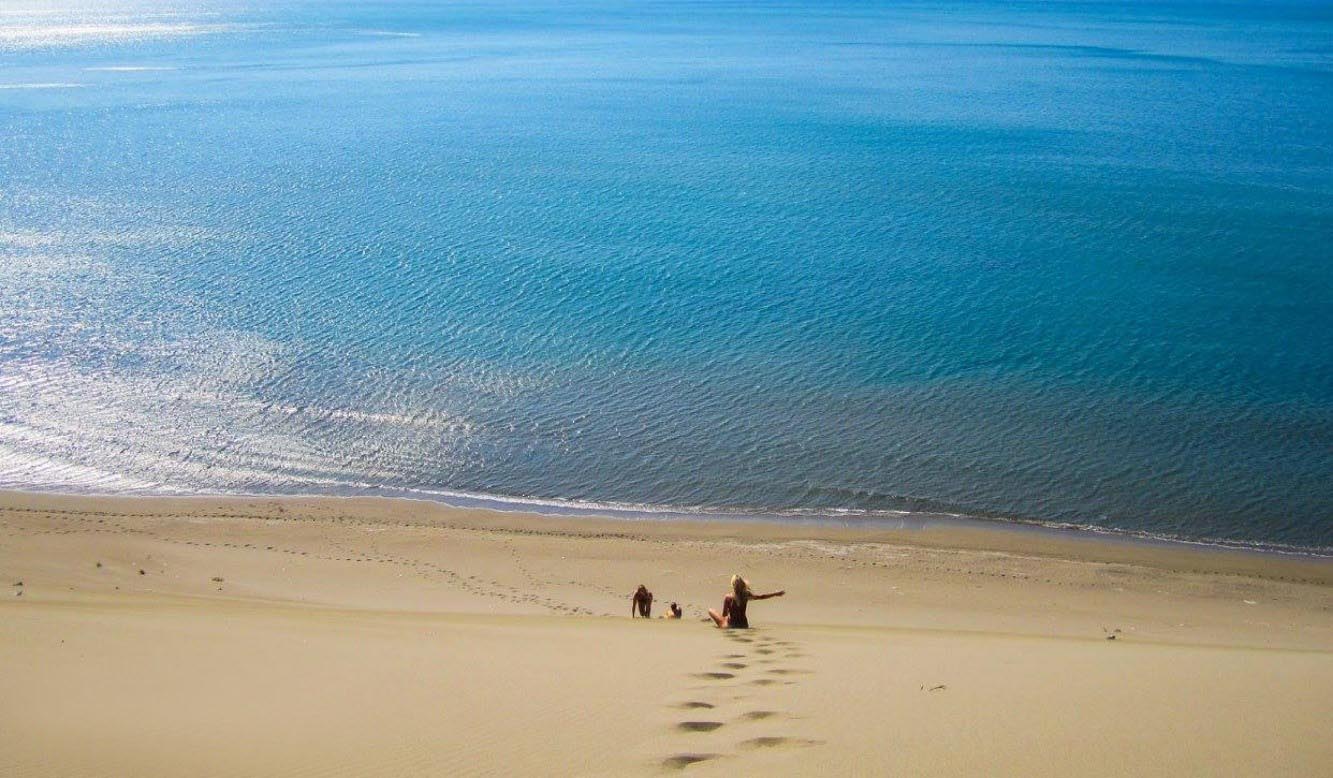 On the foothills that surround the coastal town of Shëngjin, hides the famous beach of Rana e Hedhun (“The Casted Sand”). While famous with locals, this destination remains unexplored by foreigner tourists, or even some Albanians. Its landscape is quite unusual, consisting of hills of sand that descend into the sea. The area is surrounded by evergreen pine trees, offering shelter from the sun and the perfect place for campaign and picnics even during off season. 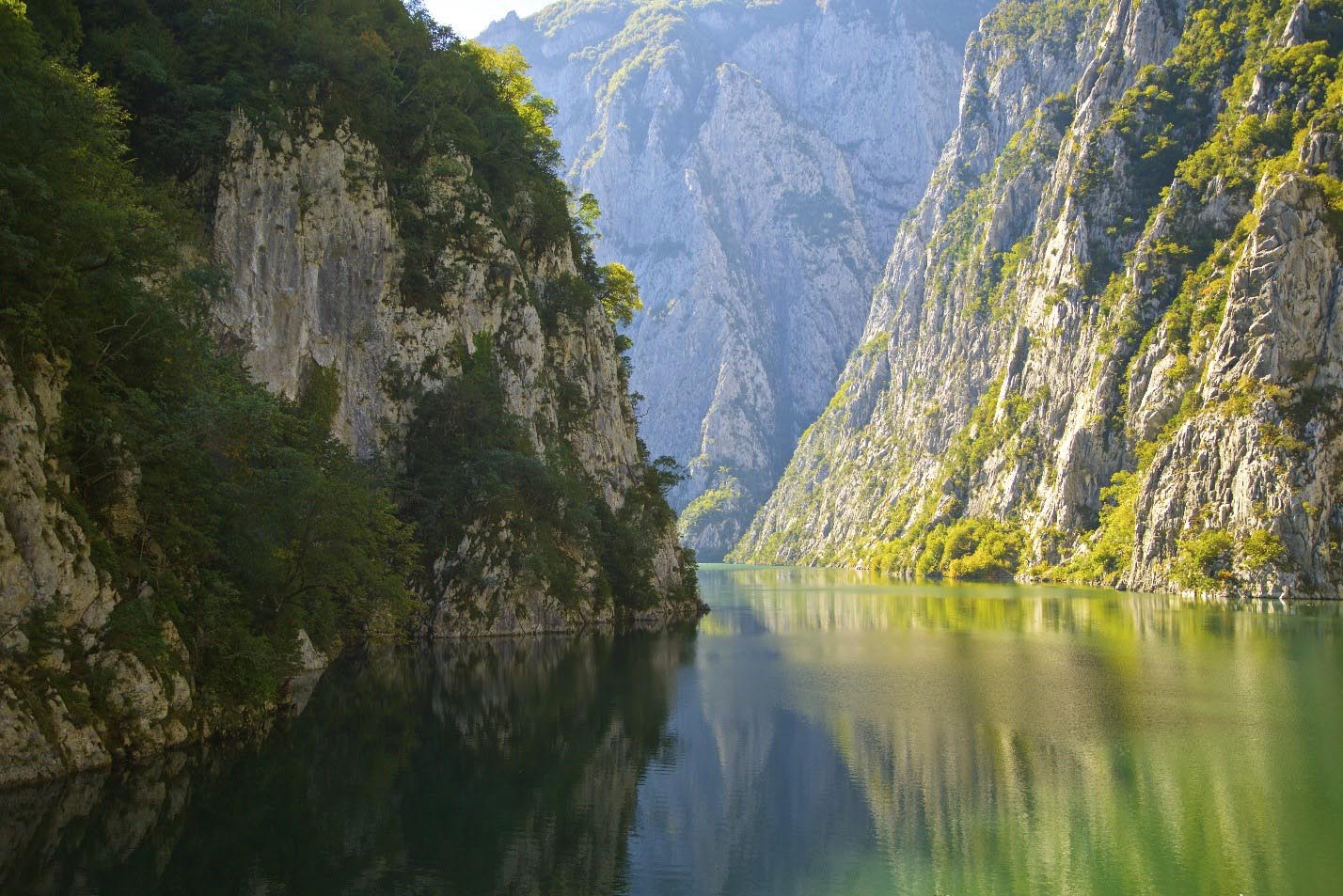 Dense forested hills, a narrow valley, and vertical slopes characterize Koman Lake, an artificial lake located in northern Albania. The lake was created in 1978, following the construction of a dam on the Drin River. Now, it offers a splendid vantage point on the magnificent mountains that surround it. To enjoy the view, visitors can hail a ferry that was set up for this reason. 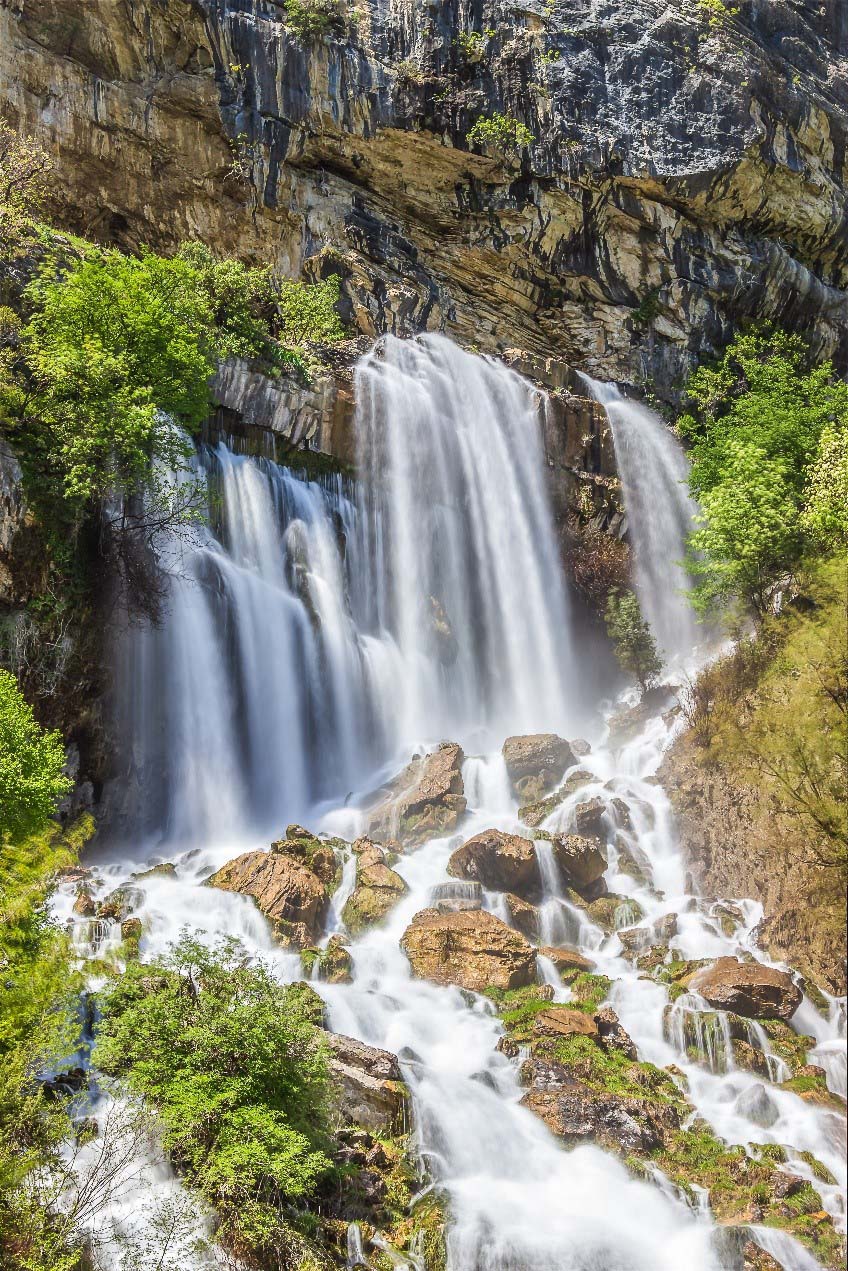 Sotira Waterfall is located in Tomorri Mountain National Park, named after the famous mountain from which the waterfall itself flows. The cascading waters provide a stunning spectacle that has attracted many tourists over the years. The waterfall is only 16 km away from the southern town of Gramsh, from where your hike will begin. From Gramsh, visitors travel to the village of Sotira to begin their hike that will last about one hour and half. 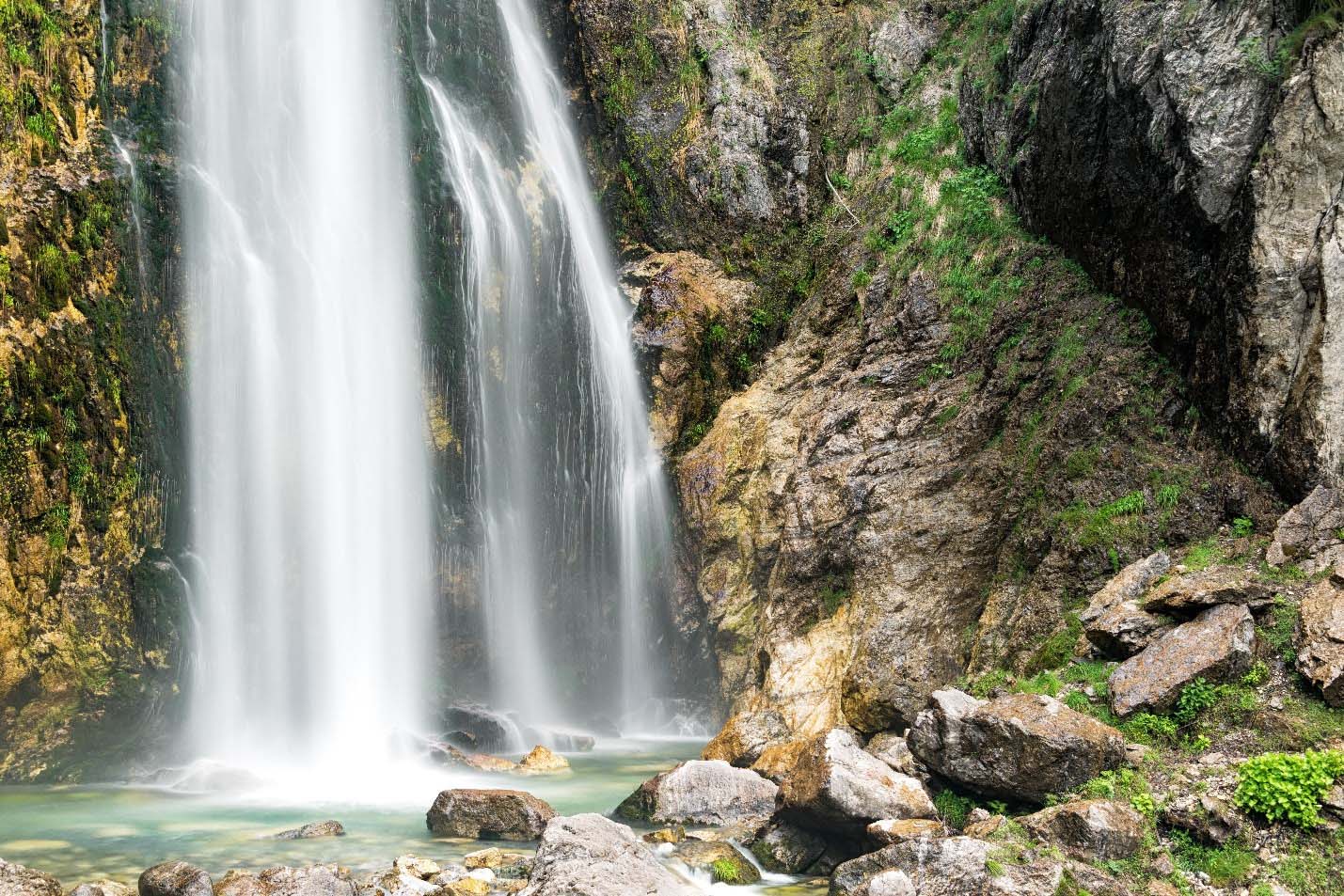 Have your cameras ready for this particular spot, as the waters of the Grunas Waterfall, cascading down the trees and craggy hillsides of the Albanian Alps present a view that begs to be immortalized. Located some 70km from the historic city of Shkodra, Grunas Waterfall is a popular tourist spot in the National Park of Theth.  Beyond just the waterfall, the area is rich in places to explore, such as the cold-water sources of Okol, the caves of Birrat me Rrathë (Round Holes), and Mount Arapi. 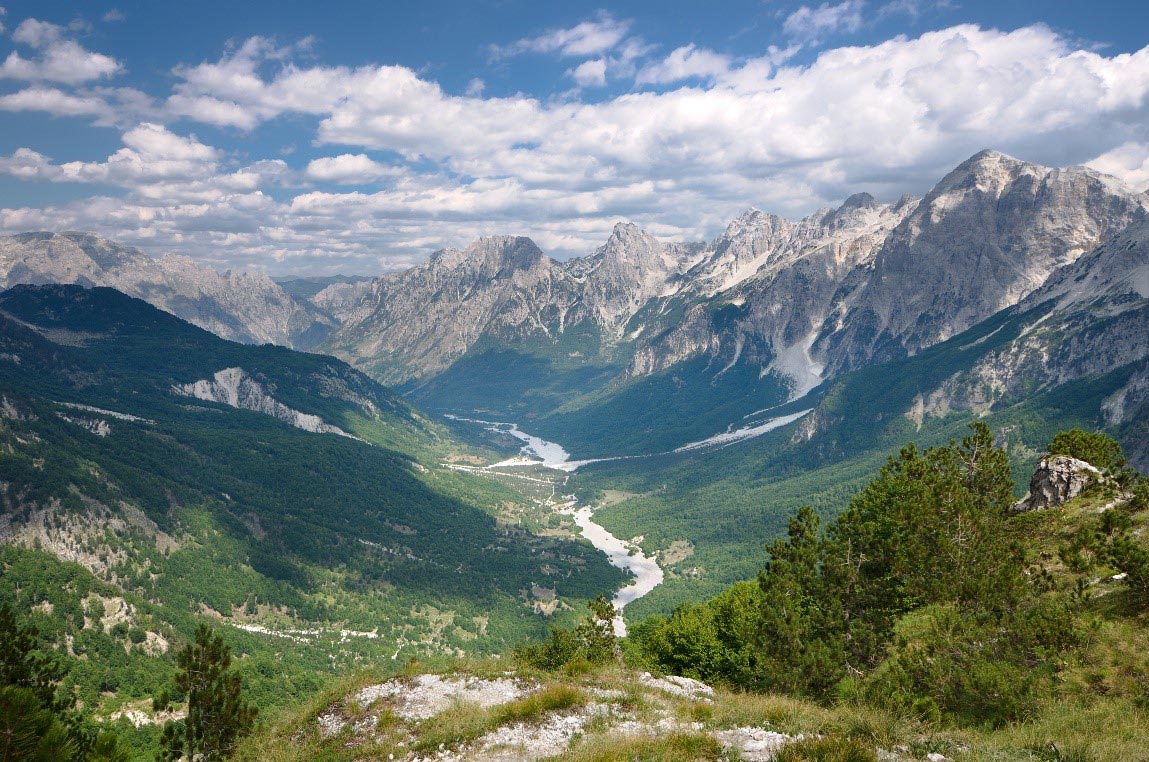 Valbona Valley is one of the country’s most famous National Parks, and one of its most beautiful.  Located a half an hour ride from the northern city of Bajram Curri, the park offers impressive vistas, featuring vertiginous alpine ridges and the Valbona Valley itself. The area is protected as it is home to a rich flora and wildlife, perfect for vacationers, sightseers, but also those interested in studying the biodiversity of the area. 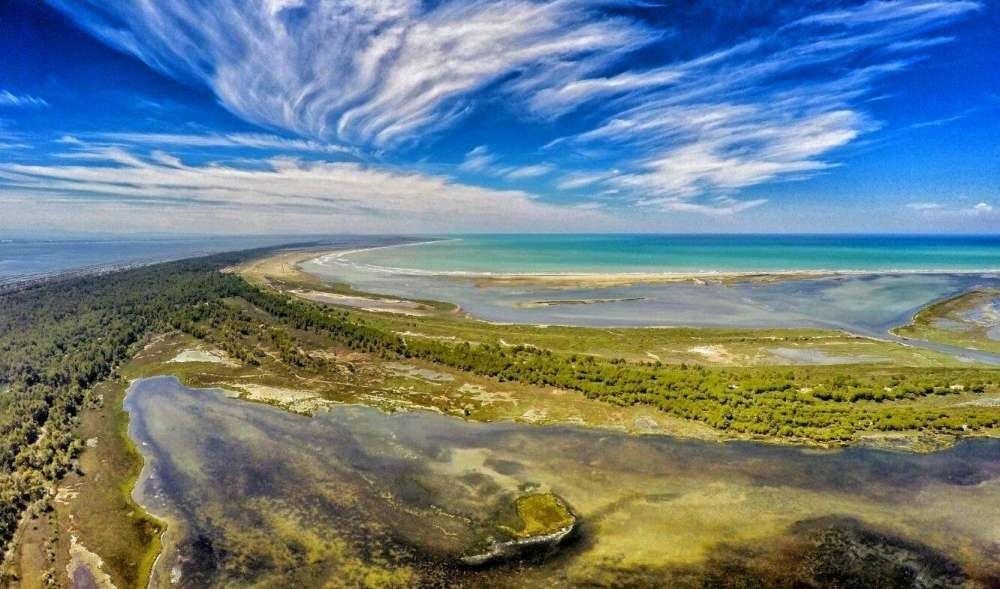 One of the largest lagoons in the Mediterranean, the Karavasta Lagoon has been a protected area since 1994. The lagoon is known as an ecological treasure trove, offering some truly singular landscapes. Located between Durrës and Vlorë, the lagoon features a park that is home to over 250 bird, mammal, and amphibian species, including rare birds like the endangered Crispy Pelican—indeed, the park is known as the most western nesting point of this kind of bird in all of Europe—as well as the Dalmatian Pelican. Five percent of the world’s Dalmatian Pelican population is found in this lagoon. 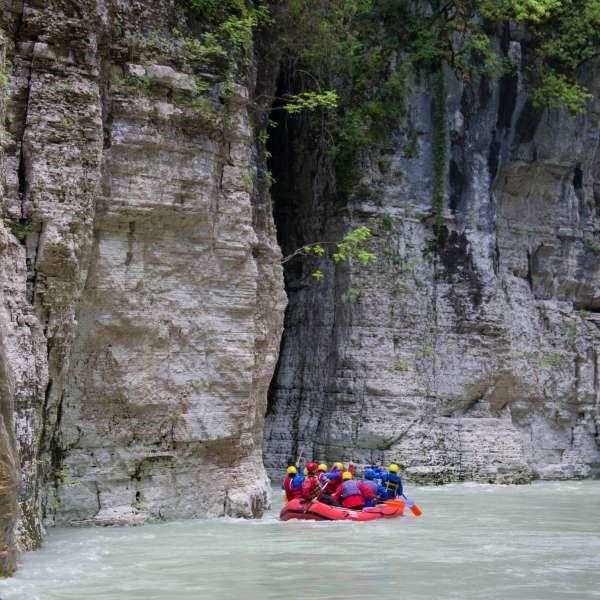 Adventurous tourists need look no further than the Osum Canyons, a river canyon in southern Albania, near the town of Çorovoda. People interested in canoeing, rafting, and kayaking can take advantage of the canyon’s many underground passages and unexplored caves. In the spring, after the snow melts, the level of the water makes it possible to explore the whole length of the canyon from the river. 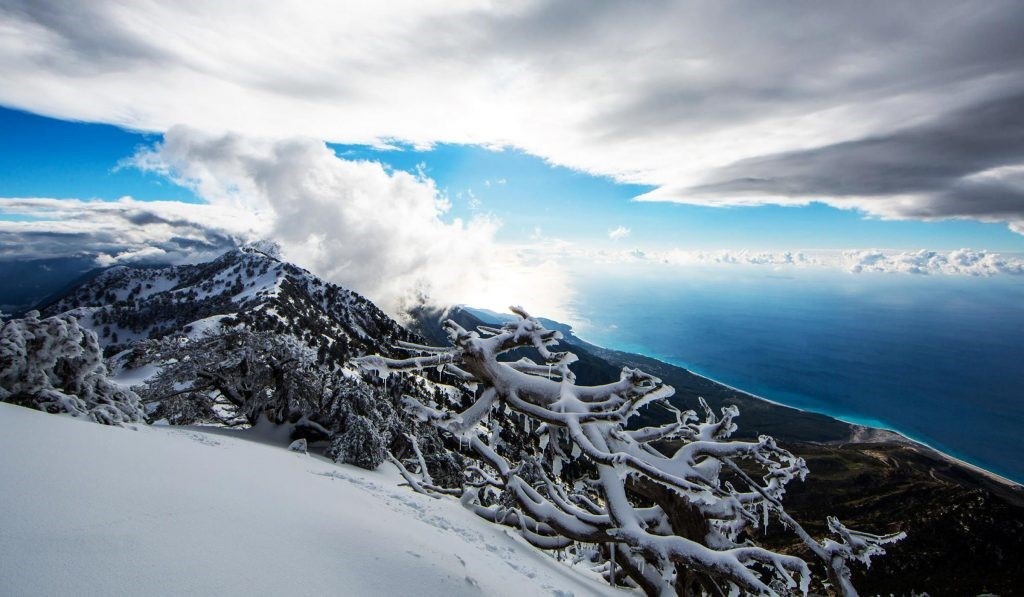 The Llogara Pass is the spot where the snow meets the sea, as incredible as that may sound. In the winter, you can enjoy a drive along the snow-covered mountains that surround the Pass, while reveling in view of the sparkling waters of the Ionian Sea below you. This same road leads you to the Ionian coast and its idyllic beaches. The Llogara Pass is located inside the National Park of Llogara, marking the dividing point between the Adriatic and Ionian Seas. It is also a spot much favored by Albanians in the winter, where you can spend the end of the year holidays with your family playing in the snow and feeding deer. 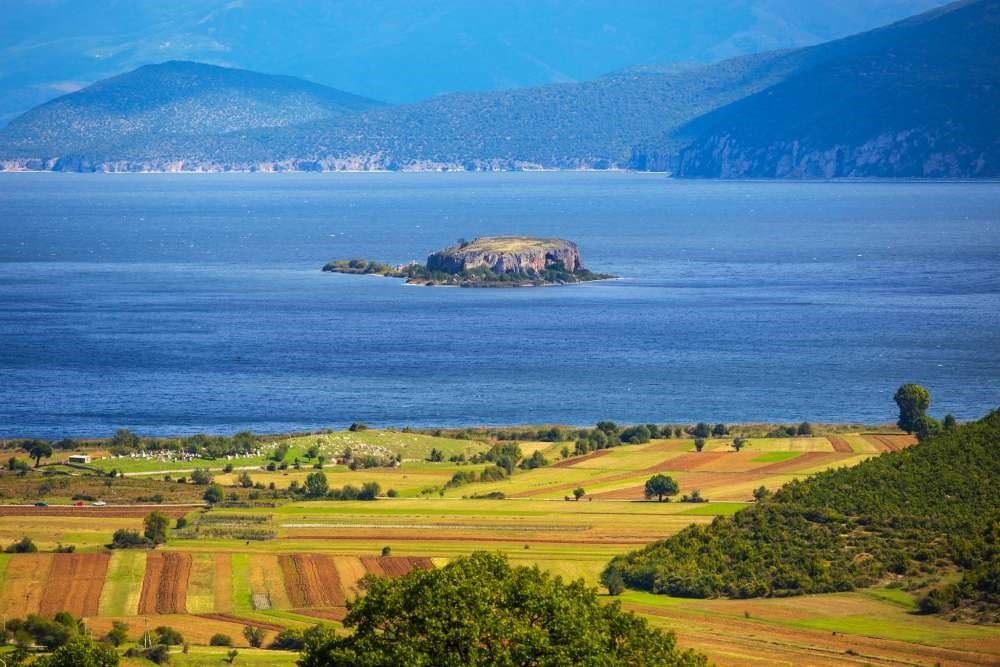 Prespa National Park is Albania’s largest park, with an area of 27,750 ha that touches both Prespa lakes. The Park is regionally known as the Balkan Park, given that it extends between the borders with North Macedonia and Greece. In addition to the richness of its fauna and flora, the park is also home to various archaeological treasures, providing a unique spot for those interested in both nature and history. Those with an interest in Byzantine history can visit the Castle of Trajan and several Byzantine-era churches and their magnificent frescoes. The Treni Cave is known for its ancient cave paintings, and the park is also famous for housing the remnants of Neolithic settlements testifying to the rich history of the area.